skip to main | skip to sidebar

It's great to write on this again. I know I've left promises of things to come hanging in the air in the past, and it's weighed on me like a fat man who just had a batch of cement pancakes sitting on my chest.
Anyway we have an unbelievably cool new release in the works.
We will be putting out a split 7" with two awesome bands, Mountain Dude (myspace.com/itsmountaindude) from good old New Brunswick, NJ and The Fabulous St. Knicholas Cage (myspace.com/stknichcage) all the way from Tulsa, OK!
These bands are like punchy poppy psych slices of heaven, get excited.
We here at VOC are so souped about this that Campbells called and offered to can us. Just kidding of course. However, that would be radical. How many people or organizations get their very own soup?
Anyway, the release date is the of course expected TBA, but I'll be letting you in on the details as soon as enough of them are materialized that warrants a blog full of information. Until then I'll leave you with one of my favorite videos:
I've said it before and I'll say it again, it isn't fair that otters belong in the wild. They are so cute they belong in my arms, what the hell!
Cats + Otters= CO
CUTENESS OVERLOAD!!!
Okay more legitimate music news in the future. Thanks for indulging in my nonsense.
-K
Posted by Viking on Campus Records at 9:49 AM No comments:

BRICK MOWER "UNDER THE SINK" LP OUT SOON 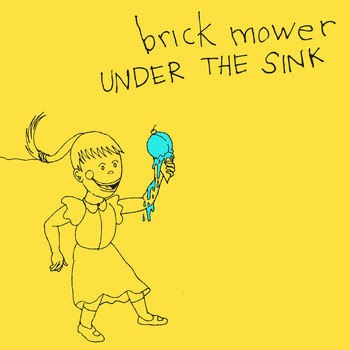 OUT MARCH 2011!
brick mower Under the Sink LP
Viking on Campus Records 008/Stumparumper Records 16
11 songs
Recorded by Eric Bennett @ the Hunt Studio
Mastered by Tom Ruff @ Asbury Media
Artwork by Perry Shall.
This is coming out soon. There's going to be a record release show on March 9th @ Meat Town USA in New Brunswick, NJ
The album's also going to be available in CD, and eventually tape through Clubhouse Records (out of Ohio & NJ).
Pre-orders up soon @: http://www.vikingoncampusrecords.bigcartel.com
Posted by Viking on Campus Records at 8:14 AM No comments:

Well what a more fitting time to write a new blog than on that of New Years Day, eh?
Anyway our blog writing has been non existent, and I'm not going to give you any shit about this being a New Year and promising more in the future, because we both know that probably will have little to nothing to do with the number of mini essays we will be churning out in the name of VOC Records.
As far as updates are concerned, we have been keeping fairly busy. In terms of shows, brick mower has been keeping a decent and steady schedule going, but who knows how long that is going to last. Sooner than later people will wise up and stop booking us I'm sure, but for the time being it's been fun! We've recently been working with...well, ya know, musicians and all that. Our favorite kind of people. Cassette tape from noise aficionado, Julia LaDense is something we're currently working on and looking forward to.
Funds are coming together better than in the past and we finally have several releases close to launch, as opposed to just one nowhere near the finish line.
Okay well we just wanted to let the world know that we are alive and adequate. More in the very near future-this time we mean it.

-K
Posted by Viking on Campus Records at 8:30 PM No comments:

If You Seek Amy, you're probably a whore too

No news is good news so that's probably why we are always happy about our news in the first place. But there is some news from the front. As reported earlier, brick mower's EP "Floors" is out and about on the label and it's cheap and good and just what you need for the change o' seasons. So far, the response has been positive and we here at VOCR appreciate the good words for brick mower. Not one person has said they hated it so far. Most like it with extreme vigor. So if you are one of the closet haters, may you come out of your closets soon. Message us on our myspace page to order.

So, just to touch on some upcoming releases:
We're saving up right now for our split 7" release with the Indiana label Songs on Tape. It'll be a split between the mid-west's best kept secret, Granny Frost, and our own brick mower. Right now, I'm putting a stamp of January or February on it but it hopefully will be out sooner.

Also, the full-length Bucky Fucking Dent album will be out in December just cause it's cheaper than pressing the 7" (who woulda thunk it, in this day in age?). If you haven't heard Bucky Fucking Dent yet, please do. Have you ever heard an old nostalgic punk talk in an interview about hearing The Ramones and saying something like, "That's when I realized, anyone can play this." Well, Bucky Fucking Dent will make you realize that you can do just about anything, including running for senate or becoming a full time grave digger. The possibilities are endless. Anyway, full length soon. Many songs. Many sleepless night for you.

And also, there's been peace talks about a collaborative effort with Iowa's Make Believe Bombs and the Felt Cat Records. VOCR will be releasing something they send us (we'll package it and make the artwork in a limited run) and they'll do the same for a band we send them. Revivalists, listen here! This may very well mark the return of the defunct Network of Halos (but for how long?). Details are sketchy at best. So please hang in.

Working on a website. Stayin' up all night. Tryin' to avoid fights. The posse stays tight. What? Good night.

-E and K
Posted by Viking on Campus Records at 10:27 PM No comments:

The brick mower ep is published and ready to be handed out to those in need of a copy for their listening pleasure as well as those who shall inevitably use it as a coaster for their sweaty glasses of iced tea. Either way, as long as it's being put to work, we're happy. We really are excited about the release of this ep, as well as the wonderful addition to the band-drummer Russ Carstens. Shows will be in the works in the near future. Got any tips, places to play? Please let us know by sending a message (www.myspace.com/brickmower OR www.myspace.com/vikingoncampusrecords). If not you're still cool with us. Anyway, we will have direct links up shortly for the purchasing of VOC releases. Actually we're hoping to have some sort of legit website up, but the more I talk about these things, the less likely they are to happen, so I shut my mouth and update you when/if it actually materializes.
For now, you can always e-mail us at vikingoncampus@gmail.com for trades/purchase info or just general sage advice from yours truly. That's all for now, kids.

Thanks a bunch,
-K
Posted by Viking on Campus Records at 9:10 PM No comments:

brick mower EP on the way

Hello all,
The new and first brick mower EP, entitled FLOORS, will be out next month. Pressing it this week. 6 songs. Anticipate with the best of 'em. If you're interested in a copy, let us know. We'll put a check next to your name and let you know when it's in.
Posted by Viking on Campus Records at 6:53 PM No comments:

Just a quick little update. For those of you on the edge of your seat awaiting news on the progress of the brick mower ep, you're in luck. The recording is complete, and artwork and all the other details are currently being assembled. We'll keep you posted on an official release date.

More releases are also in the works.


You're a saint for reading, take care.

-K. of VOC
Posted by Viking on Campus Records at 9:34 PM No comments: